You wouldn’t know it if you talked to me or just watched my videos, but I deal with my own head just as much as anybody else.

The bigger my dreams get, the bigger my fears want to get. I doubt my abilities, my worth and my strength – sometimes often.

I know I talk a lot of motivation, but did you ever wonder how I know what needs to be said? Most of the time it’s because that’s what I had to say to myself to get over a hurdle or figure out how to deal with a problem I was having!

This past week it was particularly bad. I felt myself getting sick. Our emotions are intrinsically connected to our bodies, and feeling low will make even the strongest warrior weaken.

I was still feeling unsettled in my new space (no furniture yet) and feeling anxious about all of the work I needed to do now that a business partnership I had been exploring didn’t work out. I was feeling let down by a friend who had bailed on me, and was letting what felt like the weight of the world settle on my shoulders.

And then I got in my car.

I was trying to get to the grocery store on Sunday, and I kept hitting red lights. I was hungry (don’t go shopping on an empty stomach) and I was still feeling a little gloomy.

And then I had this simple thought:

“Well just because the lights are all red doesn’t mean I’m going to turn around and go home.” 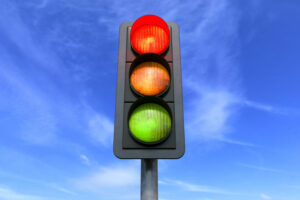 I had to laugh out loud, it was so simple. I mean, they always turn green. And sitting at a red light is exactly like what my doubts and fears felt like. A temporary pause in the drive.

And I kind of just got it.

Doubts, fears and insecurities are going to come up as inevitably as hitting red and yellow lights.

And the thing is, they’re not really slowing you down.

If you can see the red lights as just temporary stopping points, you can take the opportunity to reflect on your direction.  Reflect on your own personal responsibility in the things you’re struggling with.

So instead of doubting myself and getting all bummed out, what if I just took some time to reflect on my actions and took an active role in deciding what the next moves were going to be?

I liked the sound of that! So sitting at that red light of self doubt was actually GIVING me an opportunity to plot new coordinates in my navigation system.

Haven’t you ever had a setback that felt like failure turn out better than you expected?

I wrecked my bike last year and it majorly set me back from my training schedule. I was so frustrated not being able to work out! But during rehab, I learned about some old patterns in my body that were actually causing me to put MORE strain on my knees during my regular training. So my setback actually allowed me to get the information I needed to train a lot more effectively when I came back to it.

….a relationship fell apart, and when it ended you blamed yourself and wanted to give up on ever finding love. But while you were sitting at that red light of insecurity, you figured out some stuff about yourself that allowed you to bring a better version of you to the next relationship – and sure enough the light turned green and you zoomed ahead.

Sometimes it feels like we’re stuck at a red light for like a week, a month, a year! But it’s okay.

The best thing you can do is roll down your windows, listen to your music – let it in and embrace the moment – and don’t forget to smile at the other people stuck in traffic.

Because you’re NEVER alone on this road – we’re all going through our own road blocks and traffic lights every day.

What red light are you stopped at right now? What doubts are you facing, and have you given any thought to what your next moves should be?

What will happen when the light turns green?

Do you want to go the same direction you were going before, or are you changing course? Let me know. I’ll talk to you next week.

We Would ALL Love To Support YOU Inside Rock Your Life…

…get stronger and healthier with a community of rockstars to support you, home workout challenges for a fit body, and fresh new workout classes each week to keep you motivated! Oh, and we’ve got tons of healthy recipes too!

Check It Out And Get a 30-day Trial Today! 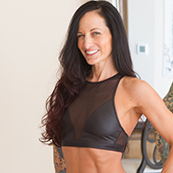 My name is Bree Argetsinger – but I’m also “The Betty Rocker.” I am a C.H.E.K. (Corrective Exercise and High - performance Kinesiology) certified Exercise Coach...

Can I help you find something?

Betty Rocker I have made progress I never expected thanks to this community!
I feel amazing and I love this group and the workouts we do!

"I'm happier and more confident than before!"

I love how much lean muscle I’ve been able to build, but more than that I am HAPPIER and more confident than before. That counts for so much!

Still a work in progress, but I’ve been following the Body Fuel System and the workouts. Thank you for your help, to a new healthier me. The next phase is all up to me. I got this!!

"Healthier, plus physically and mentally stronger!"

I, Lindsey, began the 90 day challenge on May 22, and am finishing it on August 19th! The program was challenging for me because I didn’t always have energy and motivation to work out certain days, but I navigated the obstacles and made it through by telling myself I am strong and that I will feel so much better, and will definitely feel happier if I just get up and do it.

I showed up, did my personal best and am so proud of the work I did and the example I set toward reaching my goals of becoming healthier, as well as both physically and mentally stronger!

The Betty Rocker Challenge is making my FAT CRY!

"The pictures show the changes!"

A bit odd to gain instead of lose, but the pictures certainly show an improvement! It’s been fun peeps!

You can find out more about which cookies we are using or switch them off in settings.

This website uses cookies so that we can provide you with the best user experience possible. Cookie information is stored in your browser and performs functions such as recognizing you when you return to our website and helping our team to understand which sections of the website you find most interesting and useful.

Strictly Necessary Cookie should be enabled at all times so that we can save your preferences for cookie settings.

If you disable this cookie, we will not be able to save your preferences. This means that every time you visit this website you will need to enable or disable cookies again.

This website uses Google Analytics to collect anonymous information such as the number of visitors to the site, and the most popular pages.

Please enable Strictly Necessary Cookies first so that we can save your preferences!